I miss the days when I would mail 75 applications on one day.

You know the "It gets better" Project for gays in their teens? Any tenured faculty want to start up a similar project for us who haven't gotten there yet? Or, would that require you lying through your teeth?

If so, that's okay, we're used to it. Anything will help. Please. Lie away.

[N.B.: The following bracketed note contains strong language. {N.B.: The insensitivity of this post is defused by this bracketed note disclaiming any real comparisons between the plight of homosexual teens and the plight of non-tenured faculty, which also takes half the fun out of the expected comments from people accusing me of being an asshole who doesn't deserve a job anywhere and that any place that hires me better be prepared to deal with the asshole to end all assholes because they just hired a complete asshole who is made up of a bunch of smaller assholes and within those assholes are even tinier assholes composed of certain shapes, textures, and sizes the combination of which can be deemed powers of the medium-sized assholes to make me seem assholeish to those who interact with me, but without said interaction, the powers would lie dormant in the featureless asshole substratum, i.e., they would be assholes we know not what, which is obviously an absurdity. Thus, and Q.E.D., I am not an asshole, you are for believing in such a manifest repugnancy as an asshole without any assholeish qualities that exists outside of our perceiving its assholeishness. /Berkeleyed}]
Posted by Jaded, Ph.D. at 8:07 PM 52 comments:

Does Letter Quality Correlate with Pedigree?

As a weird coincidence, these two comments showed up overnight, making the same interesting point:

As someone who has chaired a number of SCs at a highly competitive SLAC, [snip] For all the righteous indignation about the role pedigree plays in hiring decisions, I will say that the letters from faculty at more highly ranked institutions are, as a whole, an order of magnitude better than those from less selective places. The level of detail, engagement with, and subtle assessment of an applicant's work and potential is--by and large--much more impressive when the letter writer is from a top place, and I think that plays far greater a role in hiring decisions than many people acknowledge. It's not just the aura of the Leiter rankings--it's also the quality of the letter that come from the more esteemed departments. This disparity in the nature of rec letters is likely unfair to those very smart people applying from programs lower down the food chain, but I think it's worth noting in the context of complaints about how pedigree exercises an undue influence in the application process: one additional advantage to being at a higher ranked program is the strength of the endorsement letter you receive from your recommenders.

This might be a tangential remark, but in the context of various complaints about the role that pedigree plays in the hiring process--an admittedly fractious issue--I wanted to note that there is a high correspondence between the rank of a department and the quality of the letters from an applicant's recommenders (I speak as someone who has chaired three searches in the last five years). It's not just the reputation of the institution an applicant comes from--it's also the level of detail about, engagement with, and subtle assessment of an applicant's work that comes from a highly ranked department's letter writers. Given the importance of recommendations in the application process, it's important, I think, to keep this in mind when raising complaints about the supposedly undue influence pedigree plays in hiring: it's not just the aura of the letter writers, but the informativeness of the letters themselves, that plays a key role in why applicants from better-ranked places do better on the job market than those from less prestigious places

Smokers with search committee experience, what do you think? Is that true?

Deep thought of the day 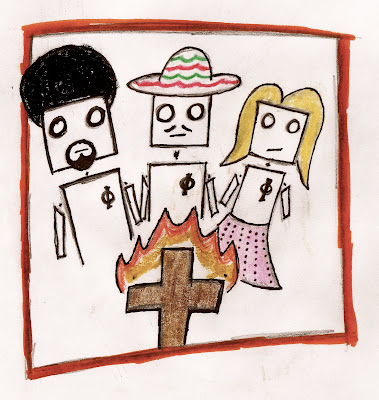 Mid-week, no less! A few words about the comic. I drew it for the old venture probably over two years ago. Colleagues there felt that it was, um, incendiary. I ended up using the crude, racial caricatures in a different comic: 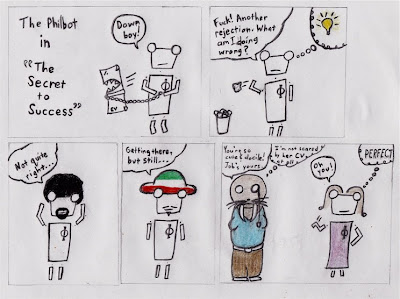 Well, I kinda run a blog now, and thought that since the zombie lies have started their annual rising from the graves (BRRRRAAAAAIIIINNSSS!!!!) a bit early this year, I'd run it.

In any case, I know a lot of y'all have rapped at me. I'll try to get your words up-and-running soon. Stay tuned.

What's Wrong With Joking Around?

Sometimes nothing; sometimes a lot. In a long comment thread here, Elizabeth puts it so well that I didn't want it to get lost there:

You know, I'm still thinking about the discussion that emerged in this thread about whether it's OK to jokily remark to a female colleague and friend, among friends, that a man who talked to her about her research was really interested in something else.

I share the reaction of another female commenter that it would be demeaning and, for me, humiliating, and I want to try to explain why.

First, though, I have to say that I find odd the whole idea that this reaction on my part shows my humorlessness and is somehow an infringement on men's right to tell jokes. What we find funny is always personal and situational. Are there contexts that produce this reaction outside of jokes that call to mind, to oppressed people, their oppression?

Like, let's say my mom is seriously mentally ill and I don't appreciate friends joking about it. If you were my friend, would you think that was a frustrating limitation in my humor? Maybe, but... I kind of doubt it. So how come when oppressed people let us know that certain jokes make things hard for them, the immediate reaction is to discount them? Why couldn't the commentator who got this response think about how it shows his own calibration of how his humor might affect some of his female friends in philosophy might be off, instead of reacting in frustration to the woman who told him this?

That said, here's why this would hurt me if I were his friend. Every day that I do my intellectual work, I rely on the useful fiction that no one in that work sexualizes me. Realistically, from a position of remove, I'm sure that that's not the case, because that's just not how sex works. And from a remove, that's OK with me. (I have a sex drive and a fantasy life too!) But up close, it really isn't.

I don't think the men insisting in this thread that women lighten up and accept their sense of humor have any concept of this. When you have to genuinely wonder whether apparent interest in your ideas is really about your ideas, or instead is about you as a sexual object, it instantly removes every external basis you might have for feeling confident. You no longer have any ability to assess where your ideas stand. Every indication of intellectual worth you've received is suddenly in question. Think about that. Women have to deal with that in some way or other. I deal with it by obstinately blocking it out. The joke would hurt me because it would puncture a strategy I need in order to do my work.

By the way, to the commenter who asked about telling this joke to a male friend about a female questioner: If I overheard that I would be hurt in the same way. The person being demeaned wouldn't be your male friend; it would be the woman whose question was assumed to be unserious.

That implicit accusation -- that the person isn't an intellectual agent, just a sexual one -- just doesn't carry the same meaning when applied to a man most of the time as it does to a woman most of the time. (I imagine, though, that some men of color in philosophy might have something to say here.) Just like, return to my example, a "yo momma's crazy" joke means something different to someone whose mother is mentally ill. Why is this so obvious in so much of normal life, but so hard for some people to grasp when the issue is oppression?

Miscellaneous Observations About the JFP

1. There are a bunch of instances of nonconsecutive ads for the same school, which I find maybe more annoying that I should. But that doesn't mean I shouldn't find it at all annoying.

3. They responded to our demands that the numbering system be changed, and changed the numbering system. Unfortunately they changed it in a way that makes no sense. Now the "web-only" section of JFP #187 starts over at 1, rather than continuing from the print version. Although this is different from before, it is different in a way that is not at all helpful. It would be much, much better if each ad were given a unique number, so that way you could know at a glance whether you'd already read this ad already. Instead, it seems to me that all of the first 50 and several ads randomly placed between #54 and #75 are duplicates.

I mean, you gotta wonder what the point of numbering the ads could possibly be if they're going to do it this way. There's nothing especially significant about the order of the ads. It's not a way to uniquely identify the ads, since the same ad can have different numbers and the same number can (now) be assigned to different ads (interpreting, as the APA does, the "web-onlies" as an extension of the print issue). And it's not a way to ascertain how many ads there are, because there are so many duplicates.

4. Didn't they used to alphabetize the ads by school name in the regional categories? Why did they stop?

5. I found a little over 30 jobs I will apply for. This is pretty similar to what was happening last year at this time. Which is very, very bad.

The Green Light Flashes; The Flags Go Up

The October JFP is online. 157 ads in the print version; 119 ads in the web-onlies--they restart the numbering in a weird way; who knows how many duplicates.

New Blog Featuring The Experiences of Women in Our Profession

It's called "What is it Like to Be a Woman in Philosophy?" and it is eye-opening.